One of my personal professional goals to achieve during my Korea time was, as you might have read in some posts before, visiting classrooms and processing the experience. I think I started with a lot of zest. As a result, this post came out a very detailed one, took about 5 hours of my time, a lot of concentration, meticulous note-taking of anything I was seeing (and the thoughts those scenes and moments spawned), and then brain effort to structure and write it up in the way it could be readable and telling the points.

Next class I visited was of a very different type and I eventually decided to blog about it in an idle way which would require little analysis on my part but would leave a special feeling of other people being part of this emerging space of a blog. There were voices to be heard, I sensed, and I think that was a good choice on my part to eliminate the thorough scrutiny.

I’m going to go similar way now writing about another class I visited in Korea about a month ago, that meaning I will cut the dissection part. Because it’s too hard and I’m not sure it’s worth it. Besides, I feel like the main interest in that class for you the reader of my blog could be the contents of the class, at least that’s what it was for me.

Welcome to Michael Griffin’s English class at Chung Ang University, Seoul. Fasten your seatbelts, or any other belts, I hope it can be an interesting cultural ride.

I’ll set the scene for you. Imagine a rainy but warm day in Seoul. That was the kind of day. Mike invited me to one of his classes and I was even going to be more than just a guest taking notes. That is exciting, if you ask me, and exactly the type of experience I’d long been thinking of having.

It’s a rough estimate, but it felt like 2 minutes of class passed after I felt a pang of jealousy. I saw Mike being relaxed but obviously confident and in control of the flow of his lesson, joking around while being on track and giving clear instructions. That was, in fact, pretty much the same Mike Griffin you’d see if you attend a presentation of his (and next chance to do so is in Japan in just 5 days). What was the pang about anyway? Well it struck me like it hadn’t in the months before that I miss teaching. I wanted to teach a/my university class and it was while being in that particular room that the feeling got so intense. I was almost aching to interrupt, interfere, comment, play a teacher, or get involved in any other way.

Which I only had to wait for. The plan for the class was the students (4 Korean ladies) doing the task assigned by Mike for one hour, and then the next hour would be divided into 15-minute “interview” sections, the interviewers being both Mike and me. This was in itself a new and unusual class format for me, and now that I’ve tested it and seen it in action, I’ll certainly try it out with some students in Russia, as soon as I get a chance.

So the four students split into two groups of two. There was “a Korean” and “a non-Korean” in each pair. The non-Korean Koreans were to read the questions, the questions that non-Koreans might wish to ask Koreans about their culture. The Korean Koreans, in their turn, were to give their Korean replies and explanations and provide any necessary comments on any further interrogation by pesky non-Korean Koreans.

Some of the questions from Mike were the following:

There were all in all 24 questions, all of them equally interesting or some even more. As you might imagine, I stopped taking notes of the things I could observe about the lesson very soon, for the simple reason of getting too curious about what the students had to say explaining their culture! By that time I’d been in Korea for three weeks and collected a fair amount of questions like that myself, so I couldn’t wait till the interview part of the class.

And while I learnt a lot in that interview part of the class and satisfied some part of my curiosity, I’m led to believe the students had a chance to learn from me, too. One of the best examples of the kind of cultural learning that happened that day and happened both ways was talking about the image of Russia. In that hour I heard 3 things which the students  shared with me as their instant associations with my country: (1) Moscow is a dangerous place to go to as there are skinheads who roam about the streets attacking, hitting and killing foreigners; (2) Russian food is greasy; (3) What do you think about Putin? … I don’t believe I need to go into much detail here about how passionate I was dealing with (1) since it’s just not true *anymore?*, and it was shocking news to me that such information travels around. Russian food is certainly different from Korean and it’s common knowledge that tastes differ. I’d heard taxi drivers here in Seoul blurt out “Putin?” first thing after they found out I was actually a Russian, not an American.

Among all other things we talked about it might be interesting for English language teachers in Russia to read that I heard this line: “My Russian groupmates struggle with their English”. I realize that it’s just one student sharing her personal opinion and it doesn’t lead us into making this unpleasant conclusion about the state of English language education in Russia, its standards and the levels students get finishing school.. There’s one thing that is certain as it’s a fact: Russian students don’t have to take an obligatory English exam as they finish school education, unlike Korean kids. For the latter English is mandatory for entering any university whatever major they choose, and English scores are in a way crucial (yes, they are a big deal). As I explained what the situation for Russian school children is like, my Korean interviewee said “I think your system is better” (stress related + not all students really need English in the future). Whichever system is better, her Russian groupmates struggle with their English.

I’ll share with you my questions about Korea and things Korean I’d been noticing in my time here. I got responses to some of these but still wonder about others. In any case, it’s useful to have them here as a memory of what I had in my mind in October 2014, and it’d be more than great to have some of your replies in the comments to this post.

It was a very informative class for me, and even insightful in certain ways. Cultural gaps were filled, for me and maybe for those students as well. In the end I did feel I was a good part of the lesson, and I thank Mike for organizing the time in the way that allowed for that! Thanks a lot, Mike! =)

1)  I enjoyed Mike’s teaching style: very smooth and natural, with interesting and timely commenting and language work. The whole first part of the lesson revolved around one and only task, and that felt right and “light”. There was no hurry to proceed to some next stages and that opened up space for fruiful work on the task there was to be done.

3) Several times Mike referred to Korean in his comments on the use of some phrases in English. I’m sure making connection with L1 is useful for students at any level of language proficiency. That is my humble assurance.

4) Here is a post to read to learn something more or less up-to-date about Russia (Moscow?).

5) I asked one student to share 3 important things my students in Russia should know about Korea. Here are her replies:

– Korean parents have high expectations of their children. They want them to study hard and get best scores.

– Wifi connection is excellent in Korea.

– Delivery service is just as excellent in Korea. Your order will arrive at your door within 10-15 mins from your call.

6) I paid special attention to Mike’s phrazing of “non-Koreans” instead of “foreigners”. I’m determined to stick to “non-Russians” from now on, whenever that comes in handy.

This post is the forth (! already) in the #livebloggingparty series. This time Mike himself and I got together and blogged. We also ate this kimchi pizza. I hope you enjoy his post that you’ll find here. And with this post the blogging party moves on to another country! Expect to be continued soon-ish.

Big thanks to Josette, Anne and Mike for agreeing to go through this with me. I’m going to leave Korea with exceptional memories. 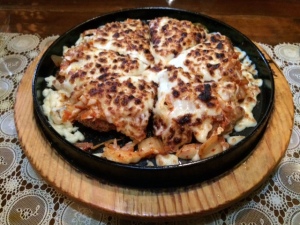 9 thoughts on “In Mike Griffin’s class.”